InDro supports Montreal Marathon from above

InDro supports Montreal Marathon from above

Drones flown by InDro Robotics pilots as part of a medical research project at the Montréal Marathon held in late September 2022 assisted in identifying a runner in distress near the end of the course. Data is now being analysed to determine if drones may be a useful tool for detecting athletes in need of assistance during mass athletic events such as a marathon. InDro Robotics explains often medical teams are alerted to an athlete in distress by an emergency phone call. But precisely locating an individual at a crowded event can take precious time. Using drones provides may assist a more timely response.

The research project and “Medi-Drone” team was organized by Dr. Valérie Homier, an emergency physician with the McGill University Health Centre. Dr. Homier has previously collaborated with InDro Robotics to conduct research on drones detecting swimmers in distress at an IRONMAN competition at Mont-Tremblant. She has also researched the effectiveness of drones in delivering simulated blood products to Montreal General Hospital, comparing the speed with traditional ground transport (the drone was much faster).

For the Montreal Marathon research, InDro Robotics had two drones in the air. The drones were sub-250 grams, meaning they could be safely flown over people. Dr. Homier identified two adjacent marathon segments – one downhill, one uphill – near the finish line where it could be anticipated athletes might be more likely to encounter difficulties such as heatstroke, cardiac event or other injury. 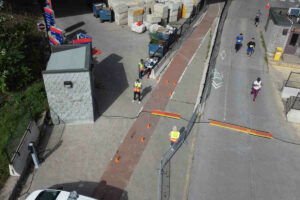 InDro Robotics explains the drones maintained positions where they could offer a live video feed being monitored by research observers. For this research project, those observers were analysing the quality of the video feed on large monitors and whether it could prove useful in detecting runners in distress. Because runners tend to move en masse in a smooth flow, someone needing help generally stands out as an anomaly.

But it was built into the research protocol that the drone pilots could be directed to change positions if observers felt someone appeared to need help, explains InDro Robotics, noting this happened with a runner leaning onto a race guardrail, then falling over and collapsing on grass. An InDro pilot was directed to obtain a closer look as help was dispatched. The runner received medical assistance and recovered.

“There’s a lot to learn from this project, and there’s a way forward for multiple surveillance methods,” said Dr. Homier. “And the drones are way up there. The view from above when monitoring moving crowds is just incomparable.

“The research project was made possible through the financial support of ‘Marathon Beneva de Montréal,” Homier continued. “My team is always looking for partner organisations to support research involving the use of new technology in the delivery of emergency care.”