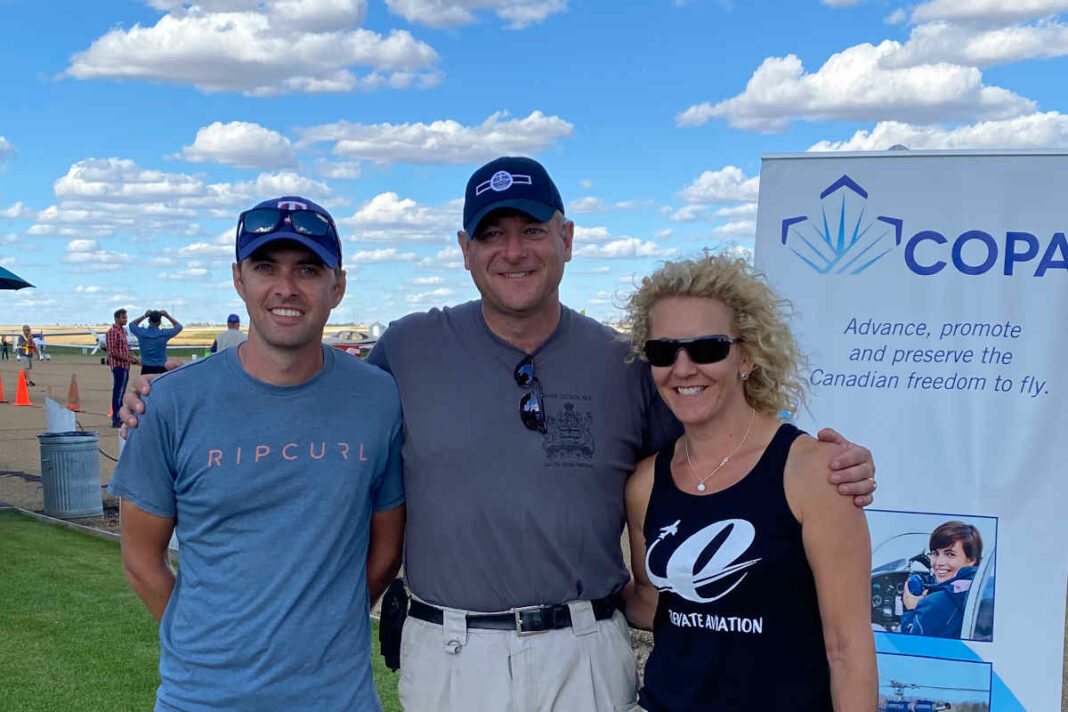 In 2020 a group of three unlikely individuals collaborated to come up with a plan to promote aviation, airports, aerospace, and communities in Alberta. COVID was putting a damper on the usual aviation gatherings and the GA community were craving opportunities to fly.

Shane Getson represents the Parkland/Lac St. Anne area in the Alberta Legislature. As an active pilot, he is bringing aviation to the table in the Alberta government and promoting the aerospace, airports, and the aerosport industry in the province. Scott Holmes is an accomplished air racer with Outlaw Air Racing. He is a regular competitor at the Reno races and has a love of all thing’s aviation. He led the pilot brief at most of the air tours. He is also a co-host on the Dead-Stick Radio pod cast. Dina Jammaz is an air traffic controller who has worked in the CYEG tower, and now in the Villeneuve tower near Edmonton. She is also the community outreach coordinator for Elevate Aviation; a nation-wide organization whose mission is “to provide a platform for women to thrive and succeed through aviation.” She was the chief cat-herder during the air-tours, ensuring all pilots were registered, briefed, fed, and not allowed to get into mischief.

This unlikely trio share an aviation passion. With their diverse backgrounds and wide-reaching networks, they set out to raise the profile of general aviation in Alberta by organizing a travelling flock of aircraft that would hop from community to community throughout Alberta. Several municipalities were involved and there were local dignitaries onsite. The communities invited the public to come out to see the aircraft and meet the pilots. Each municipality rolled out the red carpet for their visitors.

Various aviation organizations were represented with Directors from COPA, the Alberta Aviation Council, CASARA, Elevate Aviation, and Angel Flight Alberta. In addition, several local pilots and COPA members were able to join and share in the adventure. It was a great opportunity to share ideas, network, educate, and most importantly, safely experience Alberta’s beauty and people.

To read more about the success of the 2021 Alberta Air Tours, check out the October edition of COPA’s Flight Magazine (accessible to COPA members here).