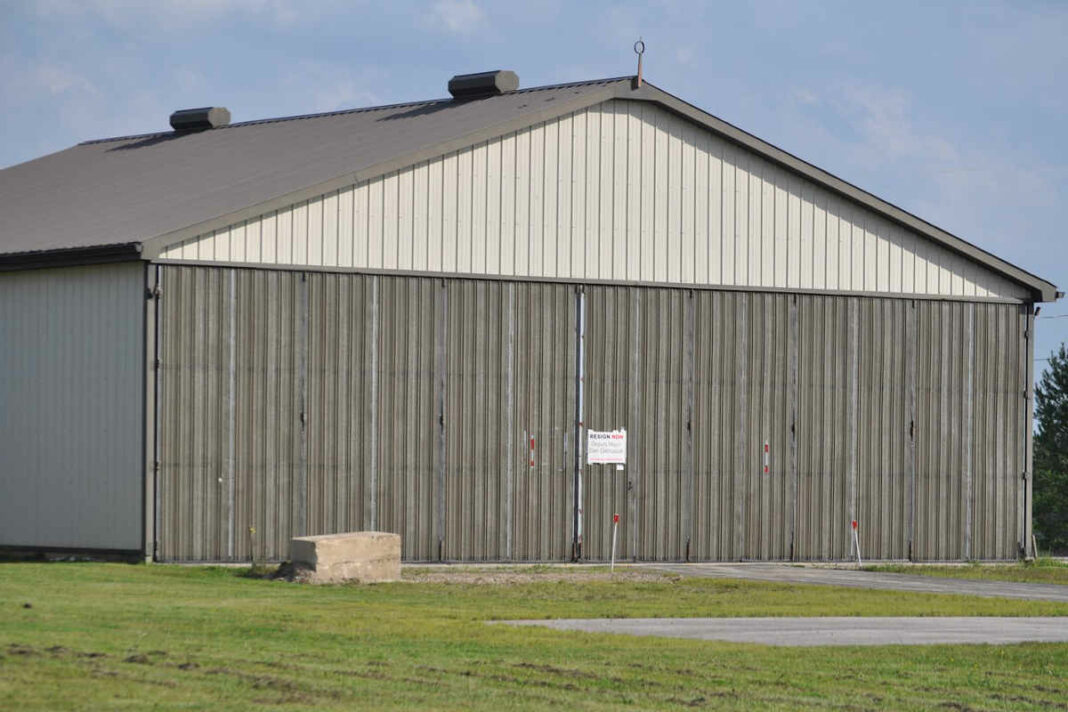 The concrete block in front of Phil Englishman’s hangar was moved away briefly on the weekend but has been put back in front of the hangar. (Photo: Pauline Kerr)

BROCKTON – An item discussed under “business arising” from the minutes of the previous meeting triggered some heated debate at the Aug. 24 meeting of Brockton council.

Regarding Saugeen Municipal Airport, and the matter of a concrete block blocking the hangar of pilot Phil Englishman, Coun. Steve Adams asked, “Where are we going with this?”

Clerk Fiona Hamilton told council that Mayor Chris Peabody had supported getting the CAOs and mayors of the three member municipalities together with the airport representatives, not just on this matter, but to start “a positive communication.”

Coun. James Lang said that at the last meeting, the possibility of an appeal had been given as a reason for wanting the discussion behind closed doors. “There’s no appeal; that’s off the table. Anything we discuss is public We need to be transparent.” He added, “Remove the block. We need to do what we can for the individual (Englishman) and move forward.”

Adams said he supports Lang. “We need to come up with solutions … get past this and move forward.”

Coun. Tim Elphick raised the issue of payment of fees, but Gieruszak said he didn’t “feel comfortable” sharing that information in open session.

A clearly irritated Lang asked that it be discussed.

Elphick asked why the cheques hadn’t been accepted, and again, Gieruszak refused to answer in open session, saying only, “There is a reason.”

After more back-and-forth comments, Lang said, “Let’s move forward and do the right thing.” Gieruszak responded by saying that’s what the airport commission has been trying to do all along.

In the days following the meeting, the stone got moved away from the hangar door for a brief time, but at last count, was back in place.

Copies of a lawyer’s letter have been sent to the mayors of the three member municipalities, Brockton, West Grey and Hanover, noting the access fee cheques discussed during the meeting are in the possession of Hanover, and suggesting a return to the status quo that existed for years, with Englishman able to use his hangar.

A letter from Christine Gervais, president and CEO of the Canadian Owners and Pilots Association (COPA) was sent to Brockton council, restating the fact Englishman won his court case. He has a valid access agreement, has paid the access fees, and still, the concrete block remains. Gervais said in the letter she has been in contact with the airport commission.