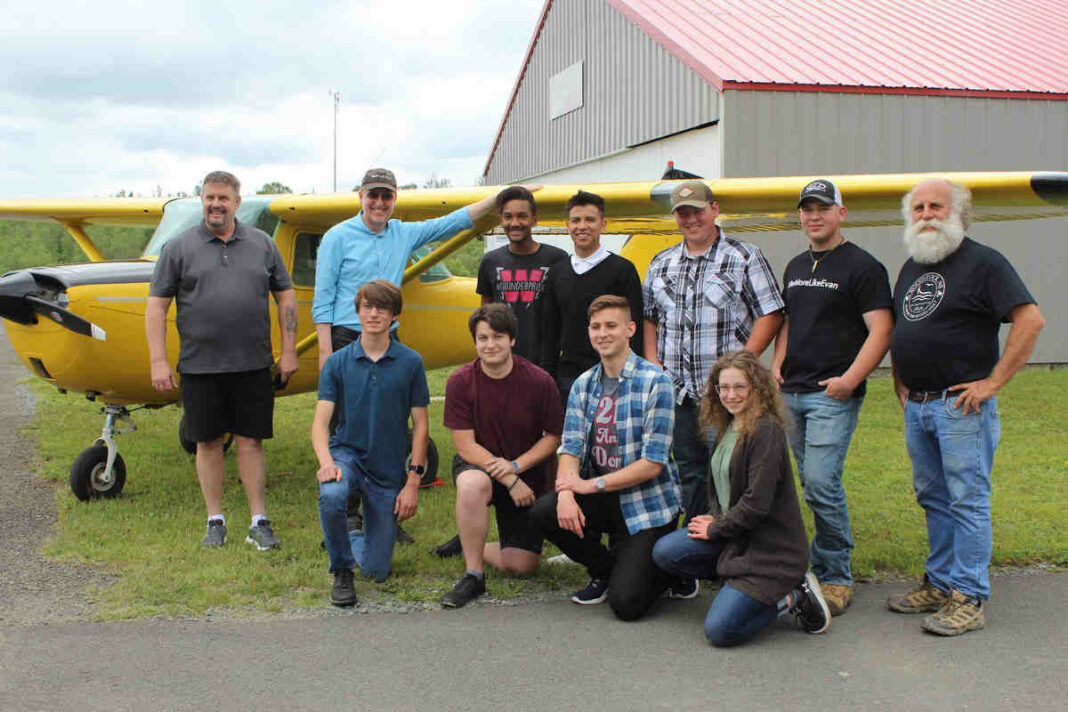 Eight Woodstock High School students who successful completed a new ground school pro-gram pose with some of those responsible for bringing it to the high school. (Photo: Rebecca Dykeman)

The students joined family, instructors, Woodstock Flying Association members, politicians and other aviation enthusiasts at the Woodstock Airport in Grafton on June 26 to celebrate the stu-dents’ and program’s success by presenting certificates of achievement courtesy of Woodstock Aviation Services. The afternoon event included a barbecue, music and a chance to view the expanding Woodstock Airport.

The high school flight class was the brainchild of Eric Cummings, Woodstock businessman, pi-lot and member of the Woodstock Flying Association. He saw the class as a comprehensive learning experience for students and a way to bring young people into aviation.

Cummings said the June 26 celebration marked a successful conclusion to the project’s first year, noting the seeds for the program were planted without any “real plans” in place.

“We were just winging it,” he said, “but we got a lot of help from friends and fellow COPA (Canadian Owners and Pilots Association) members.

The pilot project proved so successful, at least two other New Brunswick schools want to add it to their respective course load.

All speakers at the event ceremony held inside a hangar at the Woodstock Airport praised Cummings for his foresight and effort to make the course a reality.

Carleton MLA Bill Hogan, who served as WHS principal when Cummings first approached him with the idea, said he was immediately supportive.

Hogan explained Cummings already discussed the idea with Education and Childhood Learning Minister Dominic Cardy, a pilot who flies two ultralights out of the Woodstock airport, about the proposed ground-school class. Hogan said the minister supported the idea and had staff set to work on a curriculum.

Cardy joined the festivities at the airport. He said the idea appealed to him, noting it combined some of his favourite interests – flying, politics and education.

Cardy, one of the speakers during the student presentations, said the ground-training class touches several educational bases.

He said it’s a challenging course, requiring knowledge of mathematics, physics and more, add-ing he knows the course’s high demands as he is currently upgrading his pilot license, enabling him to fly larger planes.

Noting the WHS course is the only one of its type in Canada, Cardy said it addresses current problems within the aviation industry.

“We’re hoping we can be part of solving Canada’s professional pilot shortage and get people into a great sport as well,” he said. “It teaches discipline, self-reliance, attention to detail, and at the same time rewards you with some of the best views anywhere in the world, flying over this part of the province.”

While the WHS course is limited to ground-school training, Cardy said, it provides a crucial step in pursuing a pilot’s licence, noting the students get for free training that costs on average $3,000.

“You’re getting a pretty good bang for your buck there,” he said. “You get a high-school credit; then you get 3,000 bucks of basically professional training.”

Cardy said the students, if they choose, can use the course as the first step on a path to a job as an airline pilot or flying for fun.

“In my mind, that’s what we should be doing in education, making learning more engaging,” he said.

Cardy said they are looking to secure discounts from flight-training schools for students who completed the high school program. He said that members of the Woodstock Flying Associa-tion and local flight instructors helped get students in the air to show them the joys of flying.

“Let’s show these kids what it’s like to be pilots,” Cardy said.

Both Cummings and Cardy noted the support of ultralight flight instructor and owner of Adven-ture Flight, Matt McLatchy, in the project.

Cummings said McLatchy originally planned to teach the course at WHS but needed a few more hours in the air to qualify. This year, flight instructor Pierre Ouellette joined classroom teacher Tracy Dempsey virtually to instruct the class. Dempsey, a long-time teacher at WHS, is also a trained pilot.

Cummings said next year McLatchy, under the guidance of Ouellette, will partner with Demp-sey to teach a new crop of students.

McLatchy served as MC for the presentation ceremonies in the hangar. He began by welcoming everyone and expressing his pride in the Woodstock Airport, encouraging everyone to drop by for a visit and learn more about it.

McLatchy also praised the eight students who completed the program, noting they now under-stand how much work and dedication it takes to be a pilot because they needed those same traits to pass the course.

“Ironically, it’s not what you consider a bird course,” he said. “It is challenging. It is difficult. There’s a lot of new information that students would be exposed to that they normally would-n’t be exposed to, like physics, the theory of flight, engines and airframe, how planes fly through the air, navigation, and meteorology, which is a lot harder than you think.”

COPA regional director Brian Pinsent was on hand for the ceremonies, praising the efforts of everyone involved, including the students.

“This is the only high school in Canada with a program like this,” he said.

Before handing out certificates and prizes to the eight students, Dempsey also took time to praise Cummings for nurturing the idea of a ground-school high school course.

He related a story from Cummings, who said the idea began when he was sitting at the airport noticing all the grey-haired people around him. Dempsey said Cummings realized the airport wouldn’t flourish in the future without an injection of youth.

As family members and guests applauded, Dempsey presented the certificates and gifts to the students, noting the course was open to students in Grade 10, 11 and 12. The students accept-ed the gifts one by one, starting with Max Burube, followed by Conner Galloway, Jackson Cul-berson, Lev Ilin, Vanessa Harris, Colby Harris, Fernando Gonzales, and Ian Sillipant.

Dempsey said Venessa Harris scored the highest mark in the class with 100 per cent, followed closely by her younger brother Colby and Silliphant.