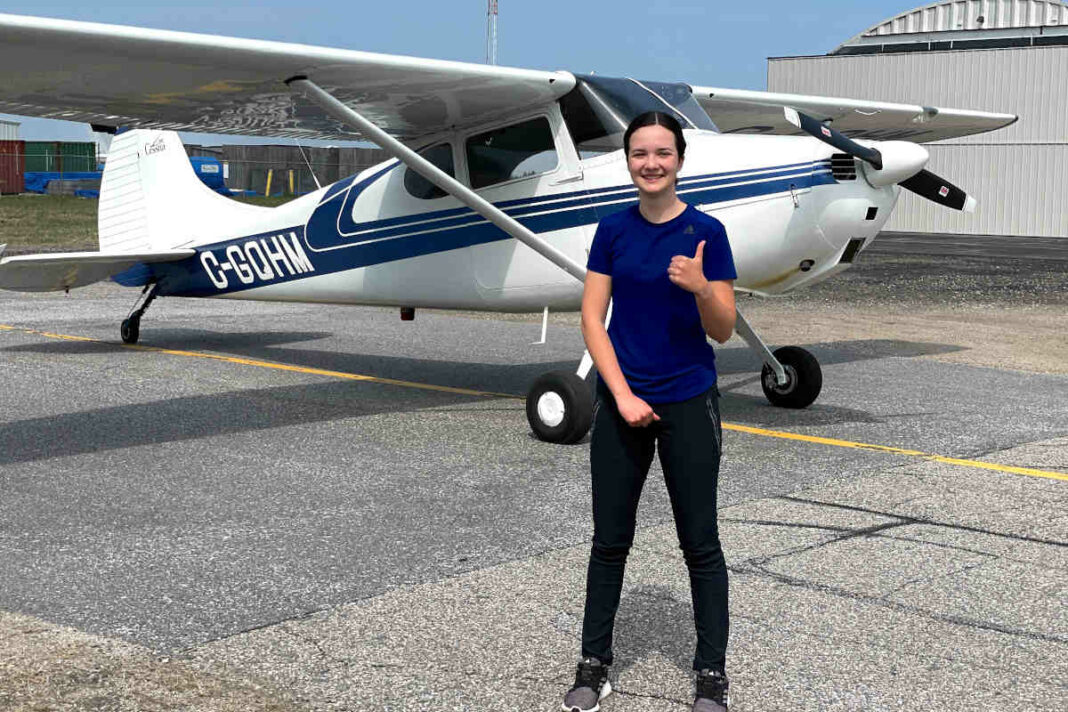 (Photo: Emilie Perron will use the COPA scholarship to help finance her Private Pilot Licence.)

For more than 25 years, the COPA Neil J, Armstrong Scholarship has helped open doors for the next generation of aviators. The scholarship, created in honour of Canadian Aviation Hall of Fame inductee Neil J. Armstrong, promotes Canadian pilot development by providing annual scholarships to ab-initio pilots and advanced flight training to licensed pilots.

Emilie Perron, North Bay, Ontario
Emilie Perron, age 16, has always been fascinated by the sky. “For as long as I can remember, I have looked up at the sky with immense curiosity. I have always been fascinated by the expanse of the universe and wondered what else the world held”. This curiosity is what inspired Ms. Perron’s interest in aviation, space exploration and astronomy.

Having met Canadian astronaut Jeremy Hansen in grade six, Perron realized that she wanted to “quite literally reach for the stars” and become a pilot and, hopefully someday, an astronaut.

A “most remarkable flight” happened last September for Perron, as she had her first flight in a Piper Super Cub and where she was offered control of the aircraft by COPA members. “Even if I don’t yet have any actual flight training, I know that I want a life in aviation. Whether that be as an airline pilot, instructor, test pilot, engineer or even astronaut, I know I want to pursue a career in the aviation world.”

Perron feels getting her pilot’s license and becoming an astronaut “may be something that seems far-fetched and impossible to reach” but she has learned that what seems impossible can be reached with some hard work and dedication.

Currently a grade eleven student at Ecole Secondaire Catholique Algonquin, in North Bay, Ontario, Emilie has an impressive academic record, consistently placing at the top of her class, receiving award recognition and delivering a valedictorian speech. Last year, she placed the second-highest average of 98 per cent.

“I have always been someone who, when their mind is set on something, will do whatever it takes to make it happen. I have always loved challenges and don’t believe I should be limited on what I can achieve because of my age or gender”.

At the age of ten Ms. Perron moved from Girls’ hockey to Boys’ Hockey and wasn’t fazed by being the only girl. At the age of twelve she started playing American Football. There were no girls’ teams in North Bay so she joined a community of male players. In her first year of playing, she was awarded the Defensive Back of the Year Award. When Ms. Perron turned 14, she started officiating Minor Hockey and Sledge Hockey in her region.

Giving back to the community is something that Ms. Perron believes is important. Over the past few years, she has contributed over 480 hours of volunteer work helping out her community. From helping run a dance camp, acting as the assistant coach for two youth football teams for the North Bay Bulldogs, and since October helping run and maintain a Curling Pro Shop.

Perron often had to work twice as hard to prove herself and show that she belonged. “In everything I have already done, I have had to become a self-starter and be willing to earn my own way, these qualities I know will be important if I want a career in aviation. I know that getting my pilot’s license will be quite a challenge but this, to me, makes it every bit more incredible and makes me want it even more.”

“I know that flight training is very expensive and with university coming up in the next year, I am not in a position, financially, to pursue this dream without assistance. This scholarship would help me get a head start on my aviation career and allow me to make a difference in this world.”

Perron is hoping to be accepted into the University of Waterloo Aviation program next year when it comes time to start applying to universities.

“When I do defeat the odds and become a pilot, I wish to share these many lessons and inspire others to do what their hearts desire. I believe that, as Canadians, we need to stand up for each other and support others to give them the courage to fight for what they want.”

Mark Daniel Pua, Abbotsford, BC
Mark Daniel Pua, age 19, started studying aviation by reading “From the Ground Up” at fifteen years old. At sixteen, he went through a rigorous selection process for the air cadet scholarships. Pua was selected for both Glider and Power Scholarships, becoming a glider pilot at seventeen and a private pilot at eighteen. At nineteen he became a commercial pilot, the youngest and first in his class of 2021. “I pursued my dream to be a Flight Instructor as I loved teaching cadets”.

“I want to be a class 1 Instructor and general aviation volunteer”, explains Mr. Pua. “I find inspiration from my class 1 instructor; he demands more of his students, and training takes longer, but in the end, they become well-regarded as instructors.”

Mr. Pua appreciates the challenge of aviation. “It gives me fulfillment to get the mission done in the most efficient and safest manner”. He went to a Jazz Aviation Pathways Program partnered school in the Okanagan Region to become a safer, better, and more competent pilot.

But Pua is a believer in continuous learning. “Studying on the ground for five years now, I have never stopped as I know that it will continue to mold me and shape me to be a better Pilot in Command”. In his spare time, he learned drone rules and flying, watched and listened to aviation videos and podcasts by Cardinal Aviation Ltd., read books such as “So, you want to be a pilot, eh”, became a freelance tutor to international students in the Lower Mainland, enjoyed mentorship from fellow aviators, volunteered and helped in local flying clubs, and more.

As immigrants, his parents found that their education was not accepted as professional degrees in Canada, this led the family to go through financial hardship. With five siblings living in a two-bedroom suite, Mr. Pua and his brother took the responsibility to be an inspiration and take care of them. “Experiencing hunger and hardships as an immigrant, I find every opportunity to be a blessing and I try my hardest on each and every one of them.”

Being bullied, because of virtues taught by his parents and Christian faith, Mr. Pua did not give in to peer pressure. “Rather I created a strategy where I would be able to better myself and others through cadets, church, volunteering, and a part-time job in a restaurant. Despite the challenging environment, I had my trust in God and I put in double the effort that was required to further increase my chance of becoming a pilot.”

Without access to a vehicle, Mr. Pua had to commute via bus or train to cadets and all the other activities. “This gave me a skill in time management and being on time at least half an hour as we don’t know when there are delays such as the bus being stopped due to malfunctions, or the train has to be repaired.”

Pau had secured a job as a flight instructor, however, due to the pandemic this fell through. He found himself back living with his parents. With no public places to study, such as libraries, he was left with one opportunity, in his parents’ garage. There he studied for his commercial pilot’s license and his Instrument Type Rating Examination (INRAT), while not letting go of his physical health by exercising daily. Winter proved to be especially challenging due to the cold.

A motivational quote that has helped Pua through life, “Never giving up, doing my best, helping others in need and letting God handle the rest”.

“As I have no control over the circumstances nor the environment, I could only control myself and how I treat others. In that way, no matter the challenge I succeed in the best I can.”

Mr. Pua will use the scholarship to help finance his instructor rating with Coastal Pacific Aviation Ltd.