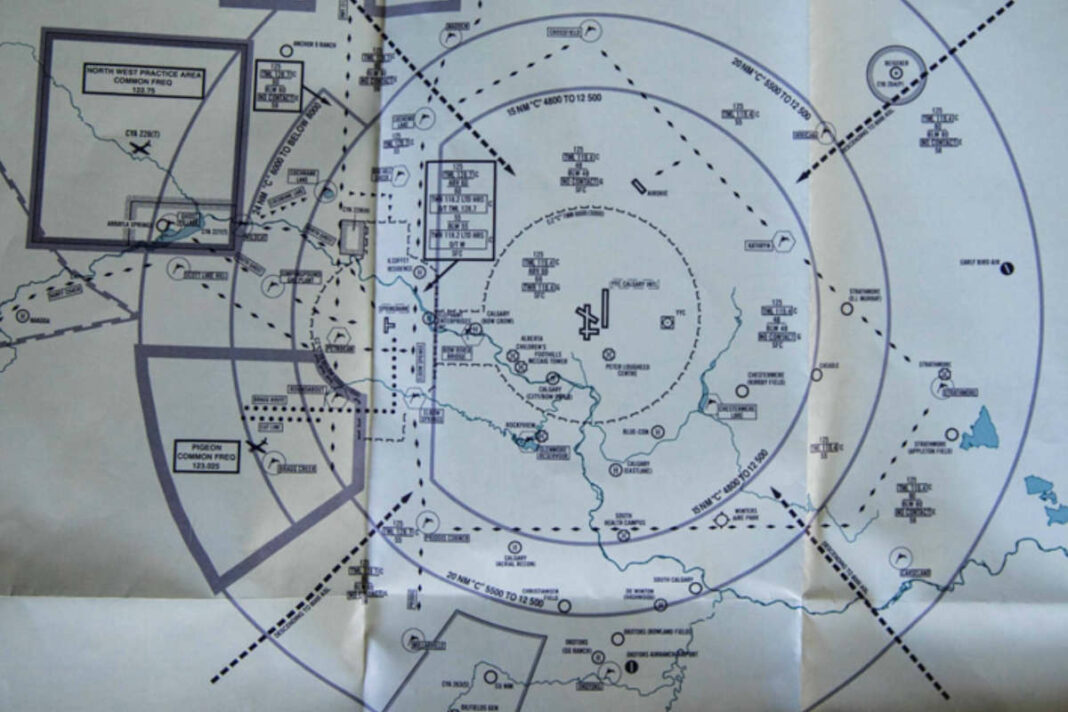 By Peter Campbell, Director External Relations, COPA (Pictured above: Back side of a CYYC VTA map)

Good day intrepid aviators. I once flew with a guy who told me he could fly anywhere within 200 nautical miles of his home airfield without a map and never get lost. “What?” I said, then I asked: “Wait – Didn’t you fly out of Saskatchewan somewhere?” Yes, said he, “I did” and every town had its own grain elevator with the town name on the side of it. I gave him that one.

For the past 20 years or so Canada has had two General Aviation-friendly aeronautical map series. These are the VFR Navigation Chart (VNC) and the VFR Terminal Area Chart (VTA). For the VNC (1:500,000 scale) there is Canada-wide coverage. This map’s principle use is for medium-length enroute navigation at altitudes of approximately 4,000-6,000 feet AGL.

The cartographic details (human-made and natural features) provided on each sheet are commensurate with that which would be seem from the cockpit at the typical cruising enroute altitude. Unlike a topographic chart, the VNC also provides some VFR/IFR navigation information such VOR/DME and NDB stations. Aerodromes, airports, airways and other controlled airspace is included to assist pilot visual navigation. Enroute hazards, such as advisory areas, restricted areas and obstructions are also marked.

The VTA chart was created, quoting the Aeronautical Information Manual (AIM): “To satisfy special operational requirements at certain high-density traffic airports with complex airspace structures.” These charts (1:250,000 scale) are produced for Vancouver, Calgary, Edmonton, Winnipeg, Toronto, Ottawa and Montreal. Because the size of the produced map sheet for both VNC and VTA are the same, and the scale of the VTA is half that of the VNC there is significantly more space for cartographic detail and aeronautical information on the VTA.

These details make the VTA much less suitable for enroute navigation but do make it the preferred map for local flight operations within about 50 nautical miles of each “high density traffic airport.” Most of these same airports now have significant numbers of aircraft engaged in flight training activities with these flights taking place with specific regions or areas around the principle airports.

For example, Calgary has significant GA at Springbank CYBW, west of CYYC. Airdrie (CEF4) and Sundre (CFN7) airports situated to the north of CYYC are also training-intensive sites. Aircraft from these three airports use several flight training areas to the south, west and north of CYYC, the principle airport. Suffice to say that this can be a very busy place and there is ample opportunity to meet or be surprised by another GA aircraft while airborne in a large area between Calgary and Red Deer.

While the Canadian Flight Supplement (CFS) can be used to show some detail of arrival procedures into the principle airports mentioned above, it is not a cockpit-friendly format. Knowing that the pilots wanted a large format map, the VTA chart designers at NAV CANADA decided to put more flight training information on the back of the map. There is no wasted map space on this chart. As a result, users of the Calgary VTA, and other VTAs with active flight airspace need to be familiar with BOTH SIDES of their respective VTA.

The Vancouver CYVR, Winnipeg and Toronto CYYZ are three more examples where both sides of the chart are used to depict areas of common use. It is also important to note that locations where Instrument approach waypoints exist inside VFR training areas, such as south of Airdrie, AB, in the WEST CREMONA CFA, the waypoints are depicted on the training area (backside) of the map. It might seem bizarre but these procedural overlaps do occur. IFR traffic using these approaches and operating in VMC are made aware of possible conflicting traffic whenever possible.

While the complex airspace structure of the Lower Fraser Valley is a story for another time, you should expect that all VTAs will have important supplementary fight safety information on the back side of the map. While the Ottawa CYOW and CYUL VTAs do not yet depict information of the reverse side of the chart, the changes are coming. It is critical to your operational safety to get and use the VTA for your area of flight. Most common use areas on the maps have also been assigned a discrete frequency for each area other than 126.7 because the volume of radio traffic will have a self-administered radio frequency (known as a CFA on the VTAs) for monitoring when operating in each of these flight training areas.

Finally, these VTAs are perishable items because the associated aeronautical information is changing at a relatively rapid pace. VTA charts and VNC charts have about a two-year life expectancy, so if your current VNC or VTA was issued before 2019 it has probably been replaced or is about to be replaced by a new version. Moreover, the VNCs with higher density airspace are being updated with a shorter frequency than those more remote locations.

For example: The TORONTO April 2020 VNC is scheduled to be replaced June 2021. The FLIN FLON, MB July 2019 VNC is scheduled to be replaced October 2023. All VTA charts are currently on a renewal cycle of about fourteen months. You can set up subscriptions with NAV CANADA or if you use an EFB such as ForeFlight you can find both sides of the map. You can find the current chart number at the NAV CANADA site here and on the French NAV CANADA web site here.