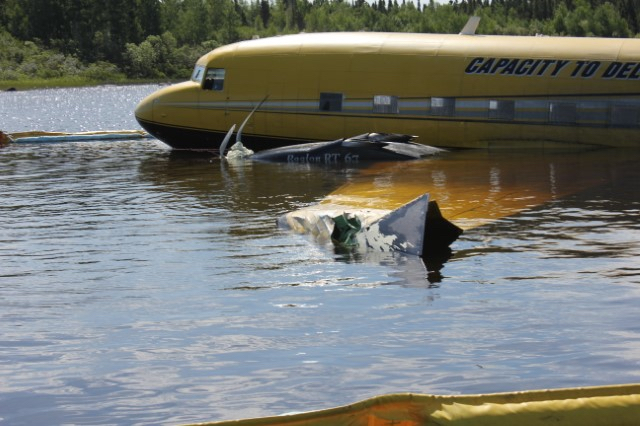 In the early hours of June 21, 2019, a North Star Air Ltd Douglas DC-3 took off from Fort Hope airport (CYFH) bound for Pickle Lake airport (CYPL), both in Ontario. Moments after takeoff, both engines lost power simultaneously and the DC-3 landed in Eabamet Lake, which lay off the end of the runway and directly below the aircraft’s flight path.

Both occupants of the aircraft, the pilot and co-pilot, swam ashore and were eventually picked up by local police. The pilots were uninjured.

The occurrence aircraft, manufactured in 1942, had been modified with a number of Supplemental Type Certificates (STCs), the major one being the Basler Turbo Conversions TP67, which  converts the engines from the original piston radial WASP R-1830s to Pratt & Whitney Canada turbo-prop PT6A-67R engines, and the replacement of the original propellers with compatible Hartzell models. The fuel system was also modified.

A January 2018 update to the aircraft’s Approved Flight Manual Supplements (AFMS) included a change that specified that the engines’ ignition systems be set to ‘CONT’ (continuous) as opposed to ‘START’, which was the previous procedure. However, North Air’s own Standard Operation Procedures were not updated.

The TSB’s investigation revealed that it was possible for the pilot sitting in the left seat (in this incident, the pilot not flying) to accidentally snag the fuel condition levers or otherwise move the DC-3’s fuel condition levers, which control fuel flow to the engines, to the off position while twisting in his seat to operate the landing gear actuation lever located on the floor between the seats.

Given the low altitude of the aircraft (less than 400 feet above ground level), there was insufficient time or altitude to allow for standard engine restart procedures. Had the ignition systems been set to ‘CONT’, reignition would have occurred automatically without pilot intervention.

Other findings and a reiterated TSB recommendation are included in the full report appended below.