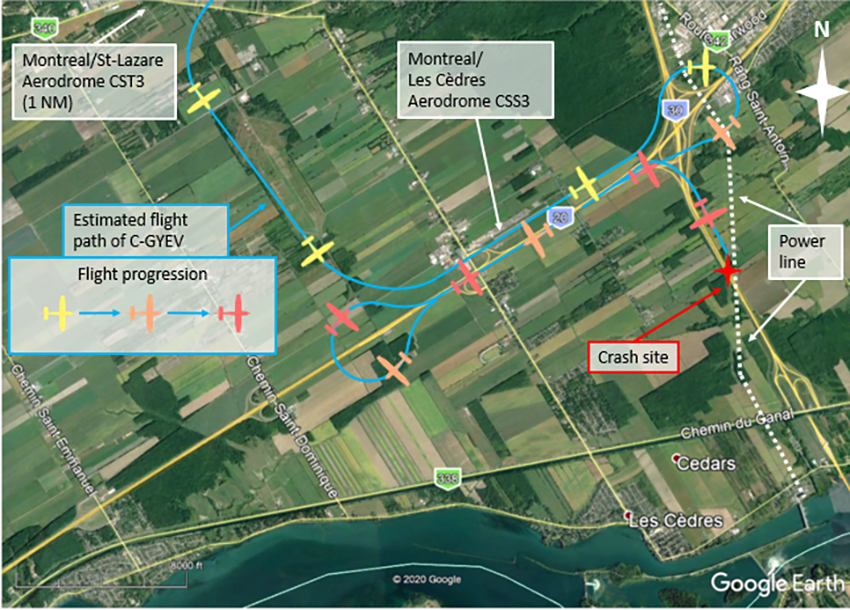 The Transportation Safety Board (TSB) this week released its investigation report into the collision in Quebec of a Cessna 150M with powerlines in the outskirts of Montreal on February 17 of this year that led to the death of both occupants at the scene.

The aircraft, piloted by an unlicensed 20-year-old holding only a student pilot permit, was being flown at night at low level over Highway 20 after taking off from Montreal/St-Lazare Aerodrome (CST3) nine minutes earlier when it struck the high-tension powerlines’ ground cable, which crosses the highway. At no point does the cable rise above 98 feet (30 metres) above ground level in that area.

The pilot, who was also the owner of the aircraft, was accompanied by his 21-year-old friend who held a valid private pilot licence and a night rating. However, the TSB investigators were able to determine that the owner was the sole manipulator of the controls during the flight.

After the aircraft struck and began to slide along the cable it separated into two pieces. The upper part, the wings still attached, slid laterally along the cable for 75 metres before striking the supporting tower and falling to the ground. The lower part of the aircraft, essentially the lower half of the fuselage, also struck the tower and separated into two more pieces before falling to the ground.

The TSB investigators determined that the Cessna was under full power when it struck the cable.

See the full report appended below for further details.