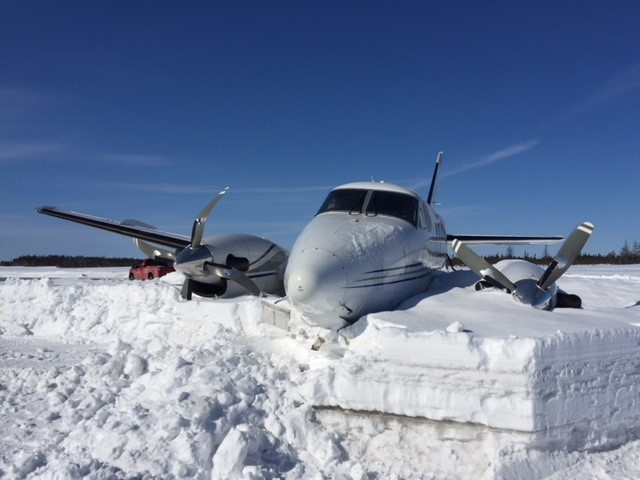 The crash-landing of a Strait Air Beechcraft King Air 200 in very limited visibility at Havre St-Pierre airport on February 26, 2018 has provoked the Transportation Safety Board to issue two recommendations to Transport Canada to “…simplify operating minima for approaches and landings…” in Canada, and to “…introduce a mechanism to stop approaches and landings that are actually banned.”

The King Air was operating a charter flight in Instrument Meteorological Conditions (IMC) when it began an approach to Havre St-Pierre airport (CYGV) shortly after 11 am. Two pilots and six passengers were on board. Runway 08 was snow-covered, and visibility was reduced due to snow showers. The aircraft touched down 3,800 feet beyond the threshold of the 4,500-foot runway. An overrun occurred and the King Air was stopped by a snowbank approximately 220 feet beyond the runway’s end, sustaining significant damage. The 406-MHz ELT did not activate. Four of the plane’s occupants sustained minor injuries.

The TSB’s investigation report cites a lack of clarity in the criteria used to establish whether an approach should be considered legal in Canada, citing examples in other jurisdictions, such as the European EASA and the American FAA, that provide much clearer information minimum visibility requirements on the approach charts used by pilots. Minimum visibilities mentioned on approach charts in Canada “are for informational purposes only” according to the TSB report.

The TSB reports that 31 incidents occurred between December 2006 and December 2019 following approaches that were conducted below Minimum Decision Altitudes (MDA) and that had few visual references. Seventeen of them occurred when visibility was below that which was published on the approach chart. Nine of the incidents have occurred in the past five years.

The complete TSB investigation reported is appended below.