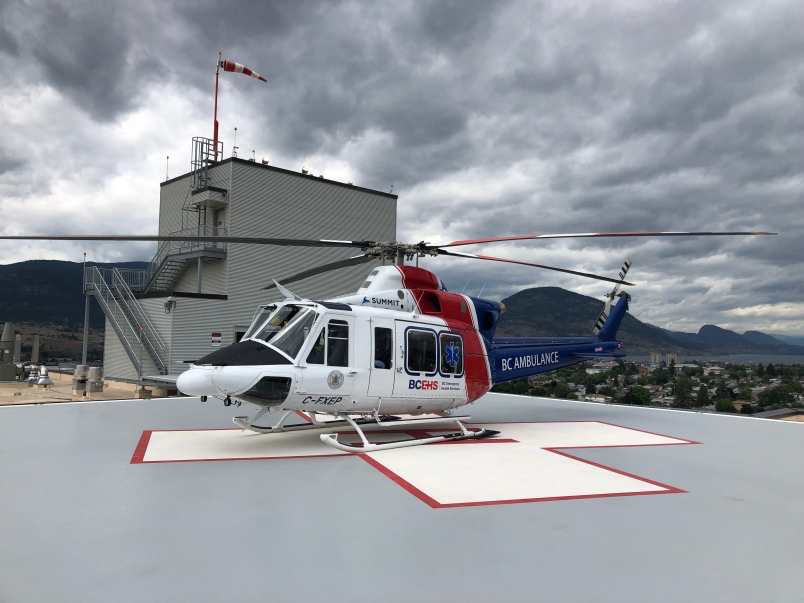 The city of Kamloops, in southcentral British Columbia, is home to a new, made-in-Canada Bell 412 EPI helicopter that joins the BC Ambulance Service (BCAS) fleet. Yellowknife, N.W.T.-based Summit Helicopters recently took delivery of the aircraft in time to meet the contractual requirements for its charter to the provincial agency.

Powered by two Pratt & Whitney Canada engines generating takeoff power of 928 shaft horsepower each, the 412 EPI has a maximum cruise speed of 124 knots and a range of 363 nautical miles. Maximum endurance is 3.8 hours. Its hover ceiling is 11,400 feet in ground effect, and 6,700 feet out.

“The Bell 412 EPI helicopter in Kamloops is [a] brand-new and state-of-the-art rotary aircraft.  We are extremely pleased to support the BC Ambulance Service in central B.C.,” said Summit Aviation Group COO Lane Zirnhelt. Summit has been providing helicopter ambulances to BCAS for over seven years.

“This aircraft features the latest in safety enhancements, an integrated avionics suite with a glass cockpit and electronically-controlled engines,” said Summit Helicopters’ chief IFR pilot Steven Williams. “The EPI offers vastly increased performance and safety margins required for the challenging role and terrain in which we fly.” Williams added, “This new aircraft is ideally suited for the regions of BC in which we operate.”

The Summit 412 EPI is the second of its type to be delivered in Canada, and the first to a commercial operator. The first delivery was to the Canadian Coast Guard.