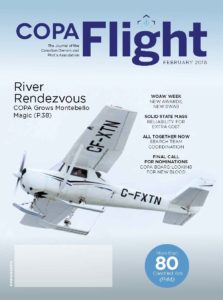 Pilot shortage
The second week of January saw another story come out about the shortage of pilots (January 8 CBC news: “Who’s going to fly the plane? Pilot shortage could get worse for regional carriers”). As air traffic grows somewhere around 5% to 7 % worldwide year after year, we just can’t fill the seats in the flight decks around the globe fast enough. The biggest increases occur in the Orient and South-East Asia, where year-on-year growth rates can reach over 30% (IATA Annual review, 2017). So it’s a domino effect taking place all over the world. The big airlines can’t easily fill the void, they pick on the regionals that get their pilots taken and in return the regionals recruit the instructors in flight schools. I was recently interviewed by the CBC and the message I conveyed is that GA is the feeder system to all of this, where it all starts. The individual of any age that looks up to the sky and decides to give flying a try, whether soaring, paragliding, motorized fixed or rotary wings, starts with a dream realized at the local flight school or flying club. A local FTU needs a local aerodrome and a local aerodrome needs understanding and appreciation from its operator and neighbours. As our Economic Impact Study (available on our website) explains, GA is the core of aviation and has a $9.3 billion dollar impact on the Canadian economy. Future flight instructors, corporate, regional, and airline pilots come from the same communities as any of us, but only if they have a desire to fly and an airport to go to.

To showcase our aerodromes and give a serious and well-needed taste for flying, there are plenty of opportunities we should never pass up such as our COPA for Kids events, Women of Aviation Worldwide Week coming up March 7 to 11 or what the Canadian Council for Aviation & Aerospace has done in partnering with groups and organizations like COPA to get something called the National Outreach Event going this summer, across the country.

We’ve got to keep that stream flowing before it’s too late. It’s our responsibility.

Propellers: A few months ago I mentioned we were asking the regulator, Transport Canada, for an exemption to the mandatory ten year propeller overhaul on non-commercial light piston operations. The paperwork  was submitted in mid-November and we expect to have an update within the next few weeks.

British Columbia hangar assessments:  Many BC members have seen their hangars reclassified as “Industrial Warehouses”, a decision that puts the buildings in the same classification as commercial storage facilities in areas such as downtown cores. There may or may not be an impact on the taxes paid in the end, but COPA is looking at the bigger picture and working on a plan to have hangar owners treated fairly by the assessment agency. More details in our E-Flight and website.