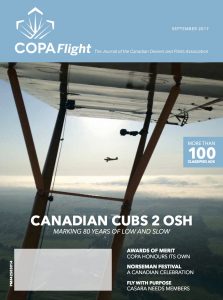 Late July was the annual biggest general aviation (GA) gathering in the world, at Oshkosh Wisconsin. COPA was there at EAA’s Air Venture and like the two previous years, held an event for all Canadian pilots to sit down and meet over some food and drinks. Thanks to our partners Magnes, AIG and McLarens, almost 300 enjoyed the cool break during the scorching summer heat. We plan to host a similar event next year and for those who attended, please feel free to send us your comments and suggestions.

ATC Privatization In The United States — Alternate Facts Also Coming To GA ?
But while at Oshkosh, it was the big moment for the GA groups down south (AOPA, EAA, NBAA) to push their initiative against the privatization of air navigation services (ANS), something quite similar to Nav Canada. At some point, AOPA media were at the Oshkosh International Tent looking for Canadian pilots who can attest to the decline of GA that ANS privatization has brought to our country. They point the finger at potential privatization for the landing fees at larger airports, safety threats to busy airspace, the lack of smaller airport funding, death of GA, more taxes for the general public and many other issues that depend almost entirely on the individual political systems in place, not on ANS privatization. Since they often cite what happened in Canada as the reference NOT to follow, it was an opportunity for me to talk with AOPA senior officials and set some facts straight and inform them of our reality, since they had not consulted with us before citing Canadian opinions and mentioning our name. The errors were corrected. Needless to say in their quest for disgruntled Canadian pilots, they were met with raised eyebrows and not raised hands.

COPA @ Work
Some interesting activities for us this fall. As mentioned last month in this column and on our website, COPA will be continuing to work with Transport Canada on the 10 year propeller overhaul. We will also be working on COPA’s comments to the proposed Unmanned Aircraft Systems (UAS) regulations changes that were proposed in Canada Gazette 1 on July 15 (http://www.gazette.gc.ca/rppr/ p1/2017/2017-07-15/pdf/g1-15128.pdf), with some of our subject matter experts. Feel free to send us your comments or opinions on any of this work here: bgervais@ copanational.org.

COPA Flights consultation
In keeping with the ongoing work to empower and involve the local COPA Flights as the focal point for our members around the country, we will be holding several COPA Flights consultations starting with the Maritimes in Moncton (NB) on September 16th, then possibly Kitchener (ON) in October, followed by Moose Jaw (SK) November 3rd. The goal of these meetings is really to “consult”, to listen to you, hear back from you, share our principles and see how we can build a stronger, more cohesive organization around the country, all the while acting for what’s best for our members in every corner of the land.