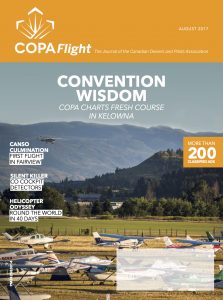 In the last magazine, I explained the reasoning behind the new logo and a bit of why and how it was chosen. After one month and getting the feedback, we can tell you it is a major success!  The timing between the magazine reaching you at home and the unveiling at the COPA convention in Kelowna was perfect, it all happened at the same time. At our convention, we presented a video COPA’s voice, Chris Hadfield, introducing the new look, something you can find on our web site.  In front a crowd of over two hundred delegates, the presentation was received with cheers and kudos from everyone.

Proud of their new logo and sporting new polos with the effigy, the board of directors was greeted with loud applause and cheers after another presentation of the video during the COPA update session on Saturday morning before the annual general meeting. Great response!  Another element showing the success of the logo is that we sold a whole lot of promotional items at the convention, with people asking for more and on the waiting list until we get more material produced.  Send us your feedback on this new energy, new symbol.

Following up on last month’s propeller overhaul exemption we are working on for piston engines involved in non-commercial operations, we have compiled the data and found nothing to support the mandatory 10 year prop overhaul, either here in Canada or in the United States. Not really surprising… We have prepared the documentation and will soon start looking at this with Transport Canada (TC), reducing cost of compliance while obviously not sacrificing safety. Members have been asking us for years about this.    Follow the news in our E-News and on our website.

In last month’s column, I wrote about the value of GA in Canada. To incite you to go to our web site and read the information, I want to point out a few key messages you should all know: the total economic impact in the country is estimated to be approx. $9.3B and each general aviation aircraft represents 0.57 Full-Time Equivalent (FTE) job.  So every GA aircraft you see out there means just over half of a full time job and generates over $280,000 of total economic output.  Curious as to how this works out?  Go to our website and look at the study.

While in Kelowna, we launched a three year program called the General Aviation Safety Campaign (GASC), emanating from a very unfortunate incident in the area that took place a few years ago. TC approached COPA to see if we could help and work with our members and we gladly said yes. I felt it was important to include all the associations in the country and so all of our sister associations that were contacted also gladly joined in the focus group to help define the initiatives that we will be working on.  More details can be found on http://www.tc.gc.ca/eng/civilaviation/opssvs/general-aviation-safety-campaign.html.