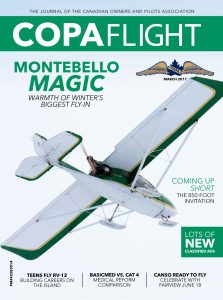 Freedom to Fly and COPA members at work

It appears the windmill issue surrounding the Collingwood and Stayner airfields is over as far as aviation is concerned, but some other things with wings will get a more thorough hearing.

As you may recall, last spring, COPA, through the member-funded Freedom to Fly Fund, intervened in the appeal of a decision of the Ontario Ministry of the Environment and Climate Change (“MOECC”) to approve the construction of an eight turbine wind farm next to the Collingwood Regional (CNY3) and Stayner, Clearview Field (CLV2) airfields. A team lead by COPA’s counsel, Glenn Grenier and COPA Director, Conrad Hatcher, prepared and participated in the two week hearing before the Ontario Environmental Review Tribunal (“ERT”) and made extensive oral and written submissions on the threat posed by the turbines to aircraft using the aerodromes. On October 7, 2016, the ERT ruled the proposed project did indeed represent a “serious threat to human health”, which is the statutory test that had to be met to challenge the MOECC approval of the project. The ERT also found that all of the proposed mitigation measures would not be effective in reducing the hazard. In rendering its 83-page decision, the ERT quoted extensively from materials provided by COPA. Along with being a threat to human life, the proposed turbines would also constitute “serious and irreversible harm to animal life”, in particular, the little brown bat. Because mitigation measures concerning our winged friends had not been extensively canvassed during the initial hearing, the ERT directed that a second ‘remedies hearing’ be held to do so, for which it confirmed it will strictly address the bats issue and not aviation. Thus, on the aviation side, it appears the matter is at an end. The ERT will make its final order in respect of the entire project after the remedies hearing concerning bats is held, which is scheduled for early March, 2017.

You’ll be glad to know that COPA is presently building the relationship with the Canadian Wind Energy Association (CanWEA), along with Transport Canada, hoping that through cooperation and collaboration we can work towards preventing future issues such as this one,

The city of Mascouche is continuing its legal battle against its relocated aerodrome under construction there even though the law is clear that they have no jurisdiction.

VF2 – (First paragraph, if the Court of Appeal refuses to grant permission to appeal)

The city of Mascouche and the Attorney General of Quebec have lost their legal battle against its relocated aerodrome under construction, the law being clear that they have no jurisdiction.

VL3 – (First paragraph, if the Court of Appeal accepts permission to appeal):

The city of Mascouche is continuing its legal battle against its relocated aerodrome under construction there even though the law is clear that they have no jurisdiction.

VF1, VF2 or VF3. As you may recall, the original airport closed down and was to be relocated with official help ($3M) from the city itself.  When the developers found the lot, 2km from the original site, the city tried everything to prevent the aerodrome proponents from proceeding.  Minister Garneau forced the developers to consult (March 4, 2016).  They did – per the new aerodrome development guidelines.  Then the Minister said they could proceed (Nov. 4).  They did.  The city followed with an emergency injunction to stop them from cutting down trees where the runways would be, to respect provincial environmental regulations.  They stopped (Dec. 9).  Along with the Attorney General of Canada (AGC), they appealed and after two hearings, the injunction was finally lifted (Feb. 1, 2017), letting them proceed with site preparation for the new runways.  VL1, VL2 or VL3

Meanwhile… the city is now asking support from the province for an appeal to be heard at the Court of Appeal of Quebec, wanting to, once again, try to break the long-litigated precedence of interjurisdictional immunity of aeronautics. COPA, along with TC, are keeping a close eye on the situation.

VL2 – (Last paragraph, if the Court of Appeal refuses to grant permission to appeal):

Finally, on Feb. 10, the Court of Appeal of Quebec refused to grant permission to appeal the Superior Court judgement. Will the City of Mascouche and Attorney General of Quebec go to the Supreme Court of Canada, to be heard once more on the same subject ? I doubt it. May the new Mascouche/Terrebonne aerodrome rise from its ashes!

VL3 – (Last paragraph, if the Court of Appeal accepts permission to appeal):

Unfortunately, on Feb. 10, the Court of Appeal of Quebec accepted to grant permission to appeal the Superior Court judgement and the development is again stopped. Our taxes will once again be used to fight on a slight variation of this constitutional theme, a fight that has been fought many times, with no losses. We’re keeping the faith and COPA will be there.