Fairmont resident Darwin (Tex) Deagnon’s mood is soaring as he was inducted into Canada’s Aviation Hall of Fame for his time flying high as a Red Knight in the early sixties. The induction took place on the evening of June 23 at the Marriott Calgary Airport hotel where he was joined by his wife Annmarie and son Conall for this prestigious honour. Deagnon was joined for this honour by two other former Red Knights who he once flew with; Bill Fraser from Vernon, B.C. and Wayne Mclenan from Mississauga, Ontario.

“It was great to see them again,” said Deagnon. “The induction was supposed to happen in 2021 but Covid put a stop to that. We found out earlier this year that the induction would go ahead in June.”

The Red Knight was nominated by author John Corrigan who wrote a book about the history of the Red Knight titled of the same name. The Red Knightreceived the Belt of Orion. The Belt of Orion Award for Excellence was founded by Canada’s Aviation Hall of Fame to honour organizations, groups, societies or associations who have made outstanding contributions to the advancement of aviation in Canada.”

The Red Knight was the solo aerobatics performer of the Royal Canadian Air Force’s (RCAF) Training Command from 1958 through 1969. Deagnon was an alternate in 1964 then was a regular Red Knight during 1965. “You were alternative for a year then Red Knight for a year then you had to move on and let someone else do the job,” says Deagnon. In the beginning they were only authorized to perform three shows but over its span of twelve seasons the Red Knight went on to make over 600 appearances, throughout North America which was shared by 17 different pilots.

The three Red Knights in attendance on June 23 were presented with a plaque honouring their induction. “We got to go on stage with all the inductees and have photos with friends and family. The plaque will be donated back to the Canadian Aviation Hall of Fame so others can enjoy it,” said Deagnon. He shares that his nickname Tex started way back in his college days. For freshman days he dressed as a cowboy, six guns the whole bit and the name “Tex” came about and stuck. Two of us from college joined the RCAF at the same time the nickname went with me. At 18, Deagnon joined the RCAF and knew instantly he wanted to become a pilot.

“My dad was my greatest influence in myself becoming a pilot,” shares Deagnon. “When I was stationed at Portage La Prairie, I volunteered to become a Red Knight.”

Commonly sent to venues considered too small for the established aerobatics teams of that time. The Red Knight pilots brought an extremely impressive and professional aerobatics show to communities that might not otherwise get the chance to see such an event; in their trademark breathtaking red aircraft which was the T-33 for the first ten seasons and for the last two Red Knight pilots flew the CT-114 Tutor. 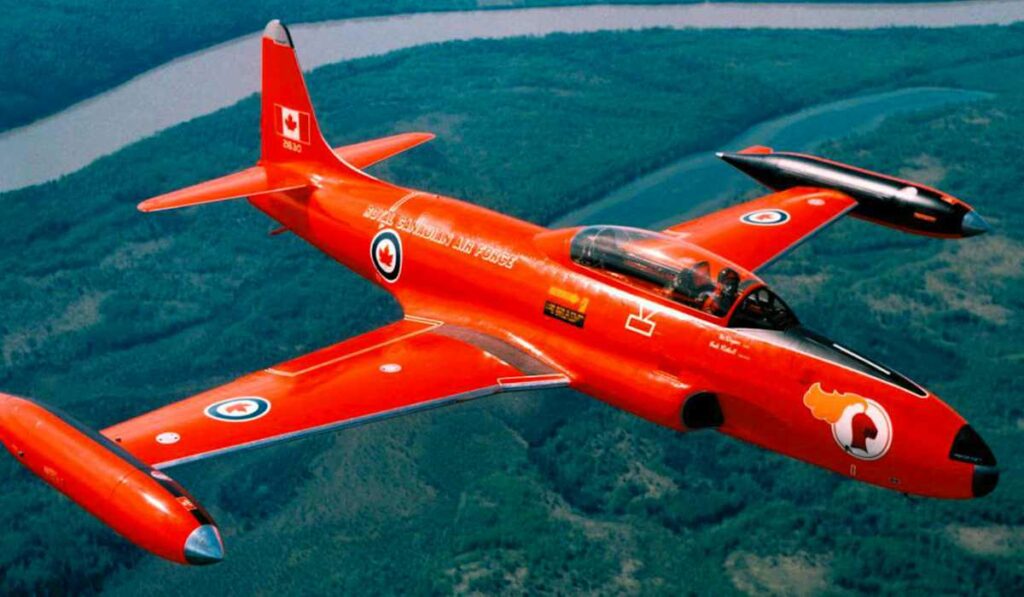 During the year Deagnon sliced the skies as a Red Knight his most memorable moments were the airshow at the Calgary Stampede in 1965 as well the waterfront airshow he flew in Comox BC. Deagnon shares that in the moment when he was flying it didn’t sink in as much but looking back, he feels truly honoured and humbled by the experience he had.

“During the ceremony last month, I fully realized the influence I had over people entering into aviation. It was said that because of the Red Knight it inspired people to learn to fly,” says Deagnon. “It was a fantastic experience from beginning to end. It brought back lots of memories from the past and I also got to share this special evening with my family. Not only did I get to reconnect with the two other Red Knights, I met with pilots who I taught to fly like General Scott Cements. I also got to meet the other inductees. Canada truly has an amazing history of aviation, and I’m humbled to be a part of it.”

Fairmont where Deagnon resides is located on the traditional territory that runs along the Columbia River of the Secwepemc (Shuswap) and Ktunaxa (Akisqnuk) First Nations.