The gate opened to visitors at 9:30 am and the show started at approximately 10:00 am each day. An incredible lineup of performers brought in enormous numbers of spectators. There was a record-breaking crowd for the first public day of the fifth edition of the air show.

Aero Gatineau-Ottawa is one of the biggest air shows in Canada. Aero Gatineau-Ottawa 2022 promised an air show in the true tradition and the show organizers delivered with an impressive program of vintage aircraft flights, high-speed passes and fighter demonstrations, as well as breathtaking aerobatics.

For more pictures of this event, visit Gusair.com.

Minister of Transport Omar Alghabra on September 27 announced the release of Canada’s Aviation Climate Action Plan 2022-2030. As outlined by the government, the action plan focuses on three main objectives, including: net zero emissions by 2050 for the Canadian aviation sector; an “ambitious goal” of 10 per cent for the use of sustainable aviation fuel by 2030; and pathways and actions that the Government of Canada and the aviation industry intend to work on to improve efficiency and reduce pollution.

The Government of Canada states that it has worked together with the aviation industry for more than a decade to reduce emissions that contribute to climate change. Transport Canada is now renewing this action plan in collaboration with federal partners and the aviation industry.

The Government of Canada describes its new action plan announced on September 27 as an important first step toward its net zero vision within Canadian aviation.

Canada’s Action Plan for Aviation will undergo a series of updates, the first in 2024, which will include reassessing long-term projections, strengthening short-term commitments, setting interim targets, and ensuring continued alignment with Canada’s climate commitments.

“Transportation, economy and climate should go hand-in-hand,” said Alghabra. “Canada’s Aviation Climate Action Plan is a good example of how we can come together to set a net-zero emission vision and lay out the actions needed to get us on the right path. Our government will engage with key stakeholders and the public to implement the activities in the Action Plan and explore additional measures to reduce pollution.”

It was the perfect day for a bottle drive. On Saturday, September 24, a steady stream of drivers arrived at the parking lot of the Royal Canadian Legion 124 branch to donate their empty bottles to the 809 Newark Royal Canadian Air Cadet Squadron.

Squadron sponsorship committee treasurer Christine Lett, along with her husband Paul, led the drive at the legion with some current and past cadets.

“I see the benefits. Shy, quiet, tiny little kids coming in and then you see them grow through and become leaders,” Lett said about her own kids, who are now too old for the program.

“The point of the program (is) to enhance, to learn and to serve,” she added.

The 809 Newark squadron accepts kids between the ages of 12 and 18 and helps them learn valuable life skills.

Vidal has been in cadets for six years now. He recently came back from London, Ont., where he received his pilot’s licence at the London International Airport with the Diamond Flight Centre.

From studying on his own time and taking extra courses to making sure he had good grades, he said he worked hard to secure a spot at the training centre.

The training was covered by the Regional Cadet Support Unit. Vidal had the chance to fly twice a day for several weeks, meet new people and learn valuable life skills.

“It was one of the best experiences of my life,” he said.

Next, he plans to go to university for his commercial pilot’s licence.

As the clock ticked closer to 9:30 a.m, cars arrived, each with trunks full of empty bottles. As the drivers popped open the trunks, the cadets were there ready to unload.

However, this bottle drive didn’t attract as many cars as the previous ones.

“It was a half of the volume that we did in our January one,” said Cory Abt, chair of the squadron sponsorship committee. The squadron also collected bottles in May.

The reduction is somewhat expected, since COVID is over and more people are going out rather than staying in, he said.

The money from each bottle drive goes toward anything the cadets might need.

“Like when they go for their pilot’s licence, they do have additional costs involved in that so we were able to cover those things that (they) need,” said Lett.

Cadets need to go through certain testing and medicals, and the money from the bottle drives helps pay for all their training needs.

“There’s no cost to the kids in the program,” she said.

The money also pays for fun outings for the cadets, like trips to Canada’s Wonderland and movie premieres.

The Legion was one of three drop-off locations as Cornerstone Church in Virgil and the St. Davids Lions Club were also accepting donations.

All bottles are stored at Van Noort Florists, which offers a large holding and sorting spot. Then, the Stoney Creek beer outlet collects them.

Even as the sun beat down, the cadets kept busy unloading and organizing the bottles.

Abt is hoping to make a few changes to boost the next bottle drive. He’s also hoping to do a cadet recruitment blitz.

“We have a fantastic program. And not everybody knows about it,” he said.

The Upper Canada Chapter of Women in Aviation, International, on September 24, 2022, hosted Girls in Aviation Day at Toronto Buttonville Municipal Airport, CYKZ. The aviation chapter is a registered non-profit organization in the province of Ontario with the majority of its members based in the southern region of the province.

Girls in Aviation Day (GIAD) is an afternoon filled with interactive games for girls aged six to 12. GIAD promotes various career paths and recreational pursuits within aviation to girls and young women through a variety of exhibits, and hands-on experiences.

For more pictures of this event, visit Gusair.com.

Each year at the COPA Fly-in and Convention, COPA recognizes its members or groups who exemplify our mission statement to advance, promote, and preserve the Canadian freedom to fly. Unfortunately, not all recipients are able to attend the fly-in event. This past summer, as a COPA Regional Director, I was able to meet with some of the recipients in Alberta and present them with their awards.

The John Bogie Memorial Award is presented to any aviation company, organization, individual, government agency or department that has raised the image of aviation, piloted and remotely piloted. The Alberta Air Tour Committee was recognized for this award for its efforts to bring general aviation to communities throughout Alberta. Through their efforts, Shane Getson, Scott Holmes, Dina Jammaz, and Eldon Gdjesdal of the Air Tour team share aviation with the public and municipal governments.

Building on their successes of 2020 and 2021, the group expanded in 2022 to invite more executive members, including myself. Also, the Alberta Air Tour Committee has since formed a COPA Flight, further uniting their missions. 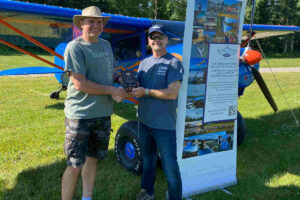 A COPA Appreciation Award was presented as a surprise to Wetaskiwin COPA Flight 51 member Jeff Deuchar. Each July, the flight organizes a camping fly-out to the Hinton Entrance Airport on the doorsteps of the Rocky Mountains. I was able to surprise Jeff with his recognition at the camp-out. He was recognized for his efforts to share general aviation with youth and the general public.

A COPA Appreciation Award was presented to Sophia Wells at a pancake breakfast held at the Villeneuve Airport in August. In attendance were government officials who heard how one of the youngest CFI’s in Canada works to promote aviation through her volunteer efforts with Elevate Aviation.

Congratulations to all the COPA Award winners!

As many of you are aware, we are currently collaborating with NAV CANADA regarding access to airspace and other items. COPA requests that our members complete the NAV CANADA Experience Form when you are impacted by restrictions or provision of service issues. The electronic form is located on the COPA website under the ‘Advocacy’ header for our members to complete. As per my previous Notice, we are aware that the location of the form may not be convenient for our members. Below are instructions for how to create a ‘shortcut’ on your mobile device. Hopefully, this will make the form more accessible for our members.

I will provide a further update regarding the NAV CANADA Experience process and progress for our members in the next issue of the magazine.

Follow the instructions below to add a shortcut to a website on the home screen of your iPad, iPhone, or Android devices.

“We are pleased to acquire this cutting-edge facility, which will allow us to deliver our award-winning services to even more aircraft owners, clients and fleet operators at YUL,” said Benjamin Murray, President and CEO of Skyservice. “Skyservice was founded in Montréal in 1986 and we are committed to continuing to invest in aviation excellence, innovation and sustainability at this airport, creating more opportunities for hands-on training and employment, and offering aircraft owners access to a full suite of best-in-class services and support.”

Volatus Aerospace on September 20 signed a collaboration agreement with Accipiter Radar to facilitate and commercialize drone flights beyond visual line of sight (BVLOS). This will allow Volatus to introduce drone solutions for a variety of aerial inspections in oil and gas pipeline, energy, railway, and arctic surveillance using remotely piloted aircraft operating beyond visual line of sight.

Accipiter Radar is a North American company that develops, sells, and operates radar and sensor intelligence networks engineered to monitor the environment and characterize the behavior of targets such as small vessels, low flying aircraft, vehicles and birds, as well as distributed phenomenon such as weather, waves and snow/ice.

“The safe deployment of drones leveraging our well-established radar surveillance solutions will make a real difference both for industrial customers and our environment alike,” said Dr. Tim J. Nohara. President and CEO at Accipiter Radar Technologies.

“Every 1,000 miles of pipeline or right of way we inspect using a drone in place of a helicopter or light airplane, reduces the carbon emissions being released into the atmosphere by as much as 2,400 pounds, according to 8 Billion Trees, a company dedicated to offsetting carbon emissions,” said Danielle Gagne of Volatus. “Considering that there are approximately three-million miles of pipeline in North America that need to be inspected as often as once a week from the air to comply with regulation, the environmental impact is staggering.”

— By Gustavo and Clara Corujo

Ontario’s Trillium Aviators on September 8, 2022, visited Kawartha Lakes Municipal Airport in Lindsay, Ontario. Attendees of the fly-out could not have asked for better weather. The favourable conditions were reflected in the number of aircraft participating in the event, including 30 airplanes and one helicopter.

The airport friendly staff were ready to greet the visitors prior to the arrival time. The airport manager Craig Logan was very generous and rolled out the red carpet with a reduction in the fuel price for the Ontario’s Trillium Aviators.

The airport restaurant also brought in additional staff to ensure the visitors were served in a timely manner. It was a great turnout as usual and everyone had a wonderful time.

For more photos of the event, visit Gusair.com.